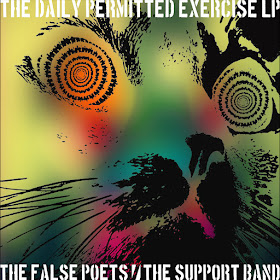 Strange times call for strange measures and so I find myself saying a few words about NICE011 in which a hitherto snappy garage band finds itself desperately releasing krautrock in an attempt to ease the Nation's anxiety at the loss of liberties imposed upon the populace to stave off the threat of that malign entity the Corona Virus. Benign nebulous entity The Support Band did not have to be asked to provide assistance in creating something to compliment the Poets' work to provide the label with it's first split lp offering.

It depresses me to write too much about COVID-19. I'm writing this over a month into the UK lockdown and the death count is still on the rise. The False Poets gathered at noon on Sunday 15th March at Nemix Rehearsal rooms in Newcastle and all the news and media was about the virus and its implications for the UK which, with a Liverpool v Atletico Madrid match taking place just a few days before us convening, was symbolic of a Keep Calm and Carry On attitude shown towards the pandemic by Britain. You could feel the stress tho, that something significant, if wasn't coming, was already here. The guy working on reception was in gloves for the first time and was cleaning vocal mics after every rehearsal to prevent the spread of infection. I had to ask where the mics were as for the first time they were in a small drawer under the vocal pa, sparkling like new. They'd normally just be left in a stand. Everything was neurotically, terrifyingly clean.

As I do with pretty much every rehearsal I brought the Zoom H1 to record proceedings to have a listen back to. It's been a godsend that device. Tristan looked into them and picked one up from Maplins on Grainger Street in the early days. A recommended piece of kit! The rehearsal was split into two parts. What became the Daily Permitted Exercise presented itself quite spontaneously after a break halfway through the rehearsal session. I might have been the last of the four to join in. I couldn't tell you what key it's in. I'd guess F#m. James seemed to lead the way with whatever he was playing to Oli. Sounded pretty good, just go with it. It's probably the most sombre sounding thing the band has created. Maybe that's to do with the collective strain of what everyone was going through and worrying about at the time. The final mix is more or less the same length as that improvised live jam with same added atmospherics from Mr White Van Peril's sydelic guitar, an honorary fifth False Poet. After the rehearsal I headed off to The Culture Bunker to drop off the Zoom H1 as I knew there was something there with that one piece. It turns out, for whatever reason, that that particular piece of music was the only thing to have recorded satisfactorily that session as I'd coyly shoved the H1 down the side of a couch in the Nemix room.
The album was released 12 days later, by which time the country was in lockdown and only allowed out once a day for work, essentials, medical help or one session of daily permitted exercise.

With rehearsals, never mind gigs, out of the question it felt right to put something out and tho tracks 1 and 3 are instrumental, I guess the titles make them kind of topical. As I mentioned in the blog on NICE004, The Support Band are often to be replied upon in times of crises. They injested The Poets' tense, incessant groove and dissolved the bones of it to issue a much clearer exercise of one's inner whateverness on The Poets' straining motifs.
Guillotine was something dropped off at White Gables Recording Studio on a previous visit and was just waiting for some companion pieces to go with, which, with these tracks, it seems to have found to round off the album.
I was present at the session when Guillotine came to be. Much like broth and cob, The Support Band presented it as is telepathically. They created two other incredible pieces the same day as Guillotine, however those two pieces of music remain lost in our space time dimensions. The music of those two tracks hang suspended in the November air of White Gables where part of The Support Band are able to go back to and visit and rest upon their gently frozen auras, much like a hammock. This is one of the reasons that the label is saving up for a better recording desk, so that we can capture future Support Band effusions more successfully. With Guillotine there are plenty of inputs going into the desk, but the output from the desk goes onto the 1 track Zoom H1, so if the output levels from a recorded performance are no good the recordings get lost.

Going back on myself to Track 2, The False Poets' first Nice Minds live release is the closing track from our set at Bubbles on 13th February. Here is the setlist which Oli drew up for the night, by the way: 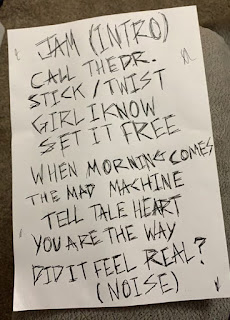 For the track on the album, the intro jam, which was also happily in the key of E, was welded onto the set closer. For us to open our first gig in 6 years with something none of us had an idea what we were doing with is fair enough, I suppose! I think we've done better improvised things in rehearsal, but not bad for a first time live effort. It actually reminds me a bit of some of the music found on this here release, which is no bad thing. That version of Did It Feel Real? features the only vocals on the album, so maybe it's more irksome, or funny, to me that I get the lyrics quite a bit wrong in the first verse. It's all good fun and shows where the band is at and where we've got to pick up from when this lockdown is lifted and we are set free again.
Riley at 13:34
Share