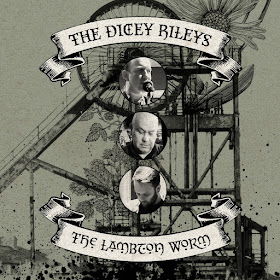 The Lambton Worm (NICE008) is the second release on Nice Mind Records by The Dicey Rileys and our first live E.P.
We were kindly asked to provide some entertainment for the Christmas get together of the Coxhoe Local History Group after one of the club's members had come to see us play at the Crowtrees Working Men's Club in Bowburn.
The event made the local press as the history group were having the first get together at a new venue for them, namely St Andrew's Church Hall. 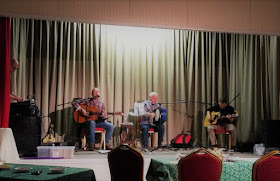 Ok, so there's a picture of us playing to what looks like an empty room, but there were actual people there! It was a lovely evening and an excellent venue for us. The photo gives you an idea of what the hall looks like and, as is often common of church halls, the acoustics were good. We got to play a couple of sets and, as the recordings turned out well, chose a selection of songs from the evening to put out as a live E.P.

The Wild Rover
Pretty much the closing number of just about every Dicey Rileys gig. I thought we would pay homage to The Dubliners with this track opening the release, as they did on their debut album. Speaking as someone who was born in the mid 70s, I can't recall coming across this song on the radio or television growing up. It's still a song that so many people know that it always goes down well at the end of the night despite this.
The song goes a long way back. There was a broadside ballad printed in 1678 called 'The Good Fellow's Resolution, or The Bad Husband's Return from His Folly'. The term 'The Wild Rover' does not appear in what was one of a number of Bad Husband songs around in the 17th century, however, the landlady verse is near identical. Over time the wayward son returning to his parents appears to have replaced the Bad Husband returning home to his long suffering wife.

The Lambton Worm
If I could find a couple of lines to say about the origins of the previous song, how much could I write about that of the Lambton Worm? That's the thing with folk music. There is always a story to tell. There's always a rabbit hole, or in this case a well, to disappear down...
Bearing in mind we were playing for a local History Group, it had been asked if we would say a word or two about the songs we were singing. Step forward Bob for his debut lead vocal on this Durham folk song. Bob, as something of a local history scholar himself, takes exception with the Alan Price version of the song which did nothing to reverse the misconception that the hill that The Worm wrapped itself around was in Penshaw. It wasn't there, as Bob so rightly points out in the final verse. The actual hill that the Worm encircled was in Fatfield. The Dicey Rileys, righting cartographical inaccuracies of local folk songs since 2019. Bob did such a thorough job of introducing the song that at 6 and a half minutes for a 3 minute 13 second long song, were Roger Waters to repeat Bob's feat for Shine On You Crazy Diamond parts 1 through 9, he would have to talk for over 52 minutes straight. I don't think he could do it and believe me, Waters can talk!
Bob does a great job here with delivering the song on its live Dicey Riley debut here. It's sure to be a regular in our sets. Up yours, Penshaw!

Mrs McLeod's Reel / Drowsy Maggie
A couple of reels we paired together. You may be able to see the video of it here. Mrs McLeod's Reel gets a mention in one of Joyce's Dubliners stories. Grace, I think. Jigs and Reels I first played live at a birthday do for my granda Joe at The Forester's Arms, West Sleekburn. I've a lot to thank my Uncle Alan for, for getting me into that. Here's a clip of The Rambling Rileys playing Drowsy Maggie at Joe's birthday bash in 2013, I think. I couldn't read music then. Alan just showed me to play along with the chords. Big thank you to my Uncle Alan for the push to learn this cracking social music. We pull this two reels off pretty well here, I reckon.

Geordie
I first came across this tune twenty years ago on an Incredible String Band bootleg tape of their BBC radio sessions. I'm not sure who sang their lead vocal as it sounded like neither Robin Williamson nor Mike Heron. I think it was from 1971/72. I don't think it was ever officially released by them. About the same time as I heard that haunting version, I picked up a tatty first edition copy of Penguin Book of English Folk Songs edited by Vaughan Williams and A.L.Lloyd for 10p. I couldn't read music, but the cover was cool and it was only 10p. Fast forward 18 years and I'm flipping through the book and see Geordie in the book and, with my newly acquired, rudimentary music reading skills courtesy of the jigs and reels revelations as outlined above, was able to figure out a chord progression for the group. I capo 5th fret to contrast with Dave's root-note rhythms. We've managed to put a good stamp on this song which was our opening number on the night recorded here at Coxhoe, so we certainly hit the ground running, albeit in a quiet way that night. The soundman did a good job on mixing the instruments on this track.
To include a few notes from the aforementioned book, apparently the ballad was well known in England and Scotland. The different countries' versions had different protagonists, however. The English hero was less of a nobleman and more of an outlaw. An old black-letter ballad names the hero as George Stoole of Northumberland, who was executed in 1610, although Lloyd's notes suggest that the song probably pre-dates this 17th century 'Robber' version. I wonder how long back the song goes?

Peggy Gordon
Paired with Geordie, is another take on a moody ballad from The Ghost Ship. I thought we were playing this particularly well on the night, then possibly stumble a bit at the end when as soon as I thought that. It's a lovely song! One idea for the E.P. was to have 3 opening lively tracks and then 3 more atmospheric, moody tracks, of which Peggy Gordon was to be the second. See the entry for the next, closing track for as to what happened to that idea...

Roddy McCorley
So you might have noticed the E.P. cover has an old mine works in the background, and you may be asking what the folk that has to do with The Lambton Worm. Well, initially the E.P. was called Farewell to Cotia and the closing track was a moody lament by former resident folk poet of Chester-le-Street, Jock Purdon. Since preparing the E.P. we got word that Jock's family wanted to meet to discuss royalties, so we had a quick rejig and dusted off a rousing track recorded during, but not released from The Ghost Ship sessions. There are some really good Jock Purdon songs we could do something with some day. I guess it's just the time to get the legalities and all that sorted. It remains something we'd very much like to do, should we get the time.

Thus ends NICE008. One of the best performing releases on the label in terms of plays to date. It's as good a place as any to get a taste of live Durham folk music whilst society is in lockdown and such wholesome activities are strictly verboten.
Riley at 14:10
Share